Will the last man standing please shut the door on your way out.
Posted By: Mexneck

The calm before the storm?
Posted By: The Answer

A while back I decided to check a couple of websites I hadn't visited in a while. What a surprise. They were gone. So, I checked several more and found a disturbing trend.

In all over 20 militia and survivalist websites/forums are dead and gone, like they never existed. These were not fly by night sites. They were some of the big players that had been online for years.

AWRM has 4000 members yet 99.9% never bother to post or reply to anything. The majority of our old regulars have disappeared. We recently spent a lot of time , effort and money upgrading to new software and migrated AWRM to a new server hoping to generate some renewed interest. Although we have plenty of lurkers no one is registering and joining in on the conversation.

What's happening? Is everyone bored?, burnt out?, scared off?, pissed off? or gone underground? Did everyone just decide to call it a day and pack it up?

A member once told me that AWRM was old, obsolete and had outlived it's usefulness. Maybe he was right. Maybe posting selfies on fakebook is what's important to everyone these days.


Recently, M.D. Creekmore said;
Quote
I've recently noticed several survival/prepper blogs that have stopped publishing probably because of the lack of interest in prepping after Trump was elected. I think that over the next several months we'll see many others stop posting new content. I've also noticed the same with prepper related YouTube channels.

I've talked with a couple of my former advertisers and they have noticed a huge drop in sales over the past few months. And they both told me that survival blogs were not sending any traffic or sales and that it's not just this site but all survival blogs that they advertised on.

I look for the prepper newsstand magazines to start going under within the next six months to a year. The readers aren't there so the advertisers aren't either. No readers and no advertisers mean no money and no money means it gets shut down.

I've never seen the interest in prepping this low. The election of Trump has decimated the prepper movement. It's sad really, sad that people who should know better have decided to put their safety and that of their family in the hands of the federal government.

Making it even worse is the fact that we are in more danger now than ever before.

Fakebook,twitter, google and youtube now openly admit they are censoring, blocking and demonetizing conservative/patriot content they disagree with. Many well known patriot sites are leaving these platforms and going to others which require you to pay to play. Can't say I blame them for wanting to be reimbursed for the hard work they've put into creating worthwhile content.

I look for this trend to continue. In time, as conditions continue to deteriorate people may wish that old school bbs like awrm were still around. But by then, all they'll have is fakebook and google-fu and will probably have to pay for the privilege of being censored and monitored by their "service".


Use it or loose it folks.
Posted By: Taurus

We need more on training and logistics.
Posted By: ConSigCor

With 4000 people you'd think someone would post something. But even when we do, seems like you can't pay folks to comment on "boring" stuff like supply and logistics or comms or intell.
Posted By: Huskerpatriot

I’ve noticed it has slowed here as well as elsewhere, and that many are flat out shuttered.

I have a feeling that many are worried about the lack of security online and the fact that they may be put on additional “watch lists” by deep state actors, and eventually persecuted when the liberals/socialist seize permanent power. There is a decided Spence of impending insecurity in the community driving people to keep their distance.

Just my thoughts and insight.
Posted By: airforce

I'm hoping that people are putting the emphasis on "doing" rather than just talking about doing, but I'm not real confident. It seems like most of my friends in their 20's are more interested in playing "Dungeons and Dragons" or some other game, than in actually preparing. They're Libertarians, there must be some way to get through to them, but so far I haven't been too successful.

Husker, I used to think people were worried about security, but I'm not so sure now. Seems everyone and their grandma is on fakebook posting selfies of their last FTX/beer drinking contest.
Posted By: Huskerpatriot

I’ve tried to steer clear of militia sites on the Facebook. As much as I distrust the internet, I distrust Facebook even more!

I’ve noticed a sense of “we’re in the clear because Trump won”... as as a reason to cut back on prepping/militia focus. With any degree of thought any fool can see that all this has done is to buy us 4-8 more years. If anything it has caused the statists left to have more reason to be more vindictive when they eventually get the opportunity.
Posted By: ConSigCor

H,
If you follow Sam Culper, he's done an in depth analysis of where this is heading.

When, not if, the dems regain control, they will never turn loose of it. They fully intend to "transform amerika" as obummer said. Once they implement their borderless, socialist utopia the republicants will never hold power again and conservative/patriot free speech will be a thing of the past.

People better be getting ready for the coming chaos. Prepare to go off grid...food, water, communications everything.
Posted By: airforce

The good news is, some people are training.

The bad news is, it's the other guys. 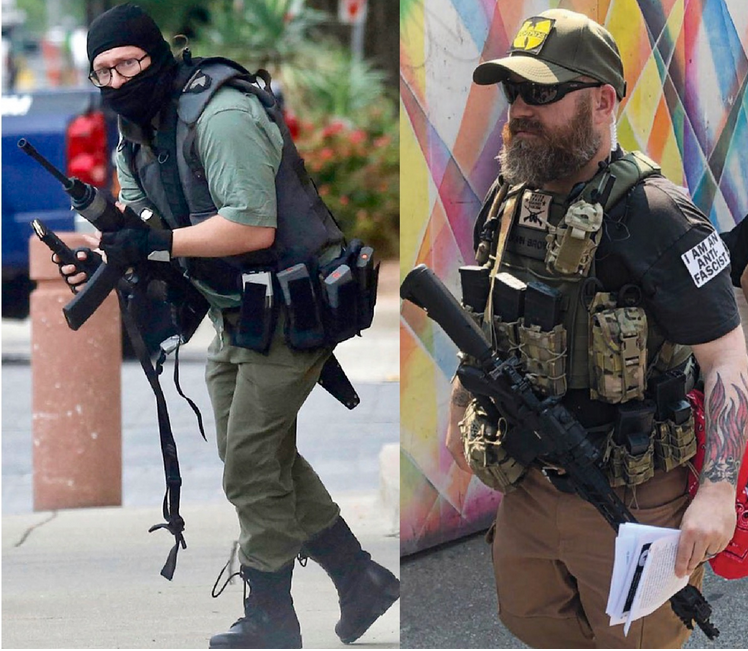 Just the other day NC Scout posted an article about a Mexican drug cartel that runs a 3-4 week training camp. Their people are taught by former military to use auto weapons, pistols, sniper rifles and rpg's. Every trainee must kill some one to pass the final exam AND they are required to EAT what they kill.

These criminals are dead serious and they have numerous cells operating in the SW US.

What are we doing to counter this?
Posted By: Flight-ER-Doc

A discussion of this on Instapundit today...

If you're not training, why worry?
Posted By: airforce

Originally Posted by Flight-ER-Doc
A discussion of this on Instapundit today...

I just saw that. Instapundit is famous for long discussions, but this one has over 400 now. Pretty impressive. Maybe it'll get a few more active.

Incidentally, I learned something else from that article. I've only worn a plate carrier a few times, and never when it counted, which may be a good thing. It turns out, I've been wearing it wrong.

It's not just the prepper message boards that are dying due to lack of interest. Some of the same is happening to amateur radio. It too, is being replaced by social media.

Right now there is a serious proposal floating around to take a huge portion of 2 meters and turn it over to business interests. They claim it is "underutilized spectrum".

In my area many of the analog voice repeaters are going silent and what activity you find has moved to the new digital modes. Many ARES / Skywarn groups have become inactive, but you can still find them on fakebook posting selfies from their last club picnic. These same people can't be bothered to key up on the airwaves.
Posted By: Huskerpatriot

I’m still slacking on getting into the amateur radio. I NEED to do this, but I am reluctant to invest I. Gear that might not be up to snuff, and lack funds to invest in quality gear.

I’ve got a16 year old boy who I’m homeschooling, I think I could easily justify studying for the test and working the radio as a science course... could call radio purchase an “educational expense”
Posted By: ConSigCor

Huskers, drop by the comm forum and we'll discuss it.
Posted By: Hawk45

Radio is something 95%+ are lacking on. Most of those ignoring 'logistics' are going to run out of ammo and starve to death!

Then there is my category, I have gotten too damned old to run and gun in the woods, but I still have the knowledge.

FB was created and funded by the CIA, no matter who the public face of it is. Thusly, "STAY THE HELL AWAY FROM IT"!

Now all you quiet souls, what the hell information do you want and need. None of us are mind readers and you would be surprised what info you have that others might need. For myself I have been learning home canning so I can at least help to feed the folks that are still active in the field.
Posted By: ConSigCor

A lot of us are getting old. Several of our moderators have passed away or moved on due to health or family issues. That is why the younger guys need to step up to the plate.

And yes, people need to start joining conversations, posting their own threads or replies. It's very difficult for 2 or 3 folks to do it all. And if we get no feedback we have no idea what you want to read.
Posted By: North Force

What's happening? Is everyone bored?, burnt out?, scared off?, pissed off? or gone underground? Did everyone just decide to call it a day and pack it up?

A member once told me that AWRM was old, obsolete and had outlived it's usefulness. Maybe he was right. Maybe posting selfies on fakebook is what's important to everyone these days.

Don't you know? TRUMP! He's there to save us all, so why would anyone need anything but Twitter to watch the golden age of the ignorant return?

While it may not have gotten this slow with Shrub (Bush2) or Daddy Bush - The Cuckservitive's always go to sleep when there is an "R" in the chair - All is good, Our team won. When the other wing of the Albatross takes over in 2020, things will get hopping again - once again behind the 8Ball, screaming and yelling for the next savior.
Posted By: airforce

I think you nailed it, North Force.

I had checked several times over the last year and this site was only going back to 404 errors, along with several others I am a member of. I don't know what was going on but it sure lasted more than a couple of days for many of us I think.

Anyway, glad to see things are back. Looking forward to reclaiming my place on the watchlists .
Posted By: airforce

Originally Posted by SLICK75
I had checked several times over the last year and this site was only going back to 404 errors, along with several others I am a member of. I don't know what was going on but it sure lasted more than a couple of days for many of us I think.

Anyway, glad to see things are back. Looking forward to reclaiming my place on the watchlists .

Glad to see you found us again, SLICK75! Yes, we were down for quite a while when we lost our ISP. Then we were down again, when our current provider suffered a massive outage. Hopefully, those problems are behind us now.